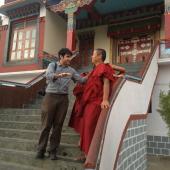 Bryce Johnson is a scientist-teacher with a love of inquiry and hands-on learning and a background in environmental science and education. He lived in Dharamsala, India, for two years from 1999-2001, where he worked at the Library of Tibetan Works and Archives to launch the Science for Monks program.

Bryce has over 14-years of experience directing and implementing programming that has grown to include: teacher trainings, institutes, exhibitions, and conferences for Tibetan monastics that are now emerging as leaders of science education within the community. He is also a staff scientist at the Exploratorium in San Francisco, where he works with teachers, artists, and exhibit developers to create professional development workshops for middle- and high-school teachers. Bryce also collaborates on exhibits at the Exploratorium and public spaces beyond, including with Tibetan monastic students in India.

Smithsonian works with the Sager Foundation and the Exploratorium to build science capacity in Tibetan monastic communities through the Science for Monks program. The program fulfills a mandate from His Holiness the Dalai Lama to create a mutually beneficial dialogue between Tibetan Buddhist practices and modern science.