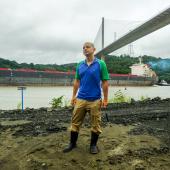 Carlos Jaramillo studies patterns of plant diversity and investigates their relations to climate change. As a paleobotanist (someone who studies ancient plants) at the Smithsonian Tropical Research Institute, his research focuses on the evolution of tropical landscapes and its biota throughout geological history. These studies have taken him primarily to Colombia, Venezuela, Panama, Peru, and Brazil. Carlos uses paleontological research to explore the important role the tropics play in regulating the global climate. He studies how changes in the distant past can suggest ways we can manage the consequences of global change today.

Carlos also led the expedition that discovered the fossils of the Titanoboa—the world’s largest snake. Smithsonian produced a full-scale model replica of the snake being displayed in Grand Central Terminal in New York City and a television show on the Smithsonian Channel, Titanoboa: Monster Snake.

Carlos received his PhD from the University of Florida in Geology and Botany in 1999.  After more than a decade as a paleobotanist, he still feels, “The excitement of finding a fossil is like nothing else.  You realize how lucky we are to be here, on this planet.”