The Mesoamerican Reef (MAR) includes the longest barrier reef in the Western Hemisphere and is a globally recognized hotspot of marine biodiversity. The MAR covers more than 1,000 km along the coasts of Belize, Mexico, Guatemala, and Honduras. Almost 2 million people depend on the MAR for their livelihoods—through fishing and tourism—and many more are protected by the MAR from storms and rising sea levels.

Today, the health of the Mesoamerican Reef is at risk. Overfishing, climate change, pollution, and habitat loss are increasing in part from agricultural runoff, population growth, and unsustainable tourism practices. Mangrove forests that would normally protect the shoreline and harbor juvenile fishes are being destroyed by dredging to create more land, while warming ocean temperatures are causing increased coral bleaching. 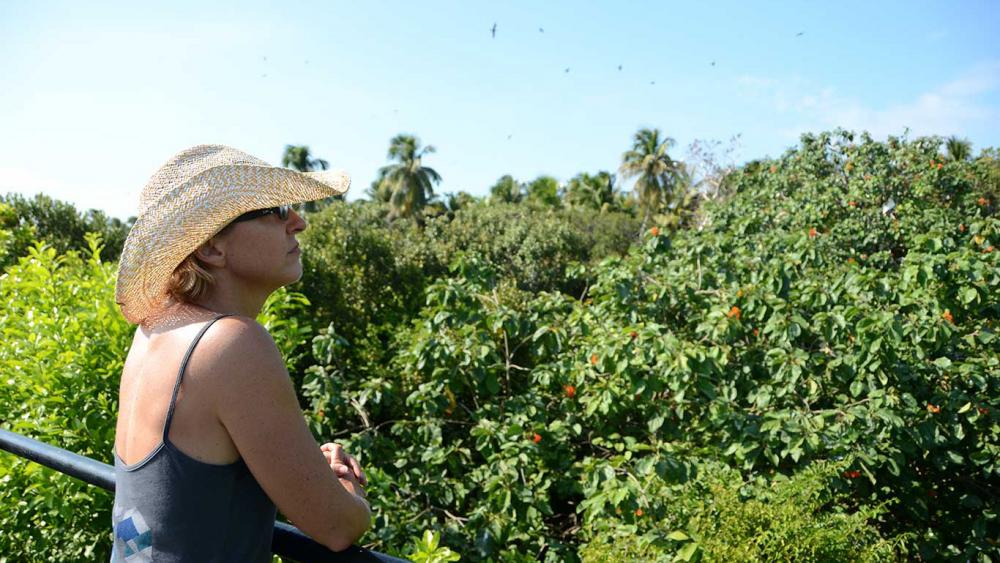 Melanie looks out over the nests of red footed boobies and frigate birds, during the filming of a documentary about Belize’s marine protected areas. Credit: Dorothea Gibbs / Third Channel.

Reef health affects community health, and when pollution, overfishing, and dredging hurt the MAR, almost two million people are negatively affected. Fishing communities want more enforcement of regulations and management to maintain a steady supply of fish, while the tourism industry wants a beautiful and vibrant reef that drives tourism to the area.

Despite these challenges, things are improving for the MAR thanks in part to Healthy Reefs for Healthy People (HR4HP), a conservation program of the Smithsonian's National Museum of Natural History. Through HR4HP, more than 60 partners working to maintain and improve the health of the MAR and support the communities who depend on it. HR4HP is pioneering multi-national efforts to develop a framework for measuring coral reef health and using these measurements to offer recommendations for governments, NGOs, and the private sector to implement better management for the MAR. 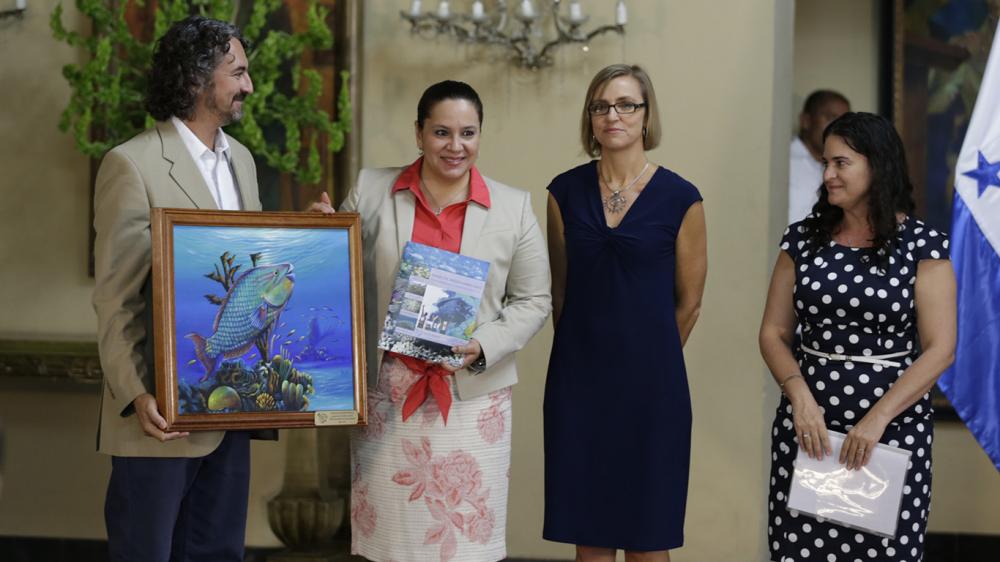 Melanie with the First Lady of Honduras, Ana García de Hernández (center left) during the launch of the 2015 Mesoamerican Reef Report Card. Credit: Leonel Estrada/ Press Office Honduras.
Smithsonian scientist Melanie McField launched HR4HP in 2004 to improve conservation of the Mesoamerican Reef by measuring its health using common indicators and then determining how to best convey this scientific information to policymakers. Melanie directs the program from the Smithsonian Marine Station at Ft. Pierce, FL. In the early 2000s, Melanie and a group of scientists working in the Mesoamerican region realized that they needed to determine just how big of a problem faced the MAR by developing a common definition of reef health, with quantitative indicators and, equally importantly, learn how to collectively track the health of the MAR over time.

Creating a way to rank reef health was challenging—there had to be a way to get four countries together on a consistent basis, as well as getting scientists on board to establish what the criteria would be in regards to coral reef health. Smithsonian’s power to convene helped bring scientists together to develop these criteria. Melanie describes how vital this step was, “getting that collaboration, that spirit or a common vision, of a common voice, of people speaking the same language, talking about what our goals are and what is helping the reef. ” 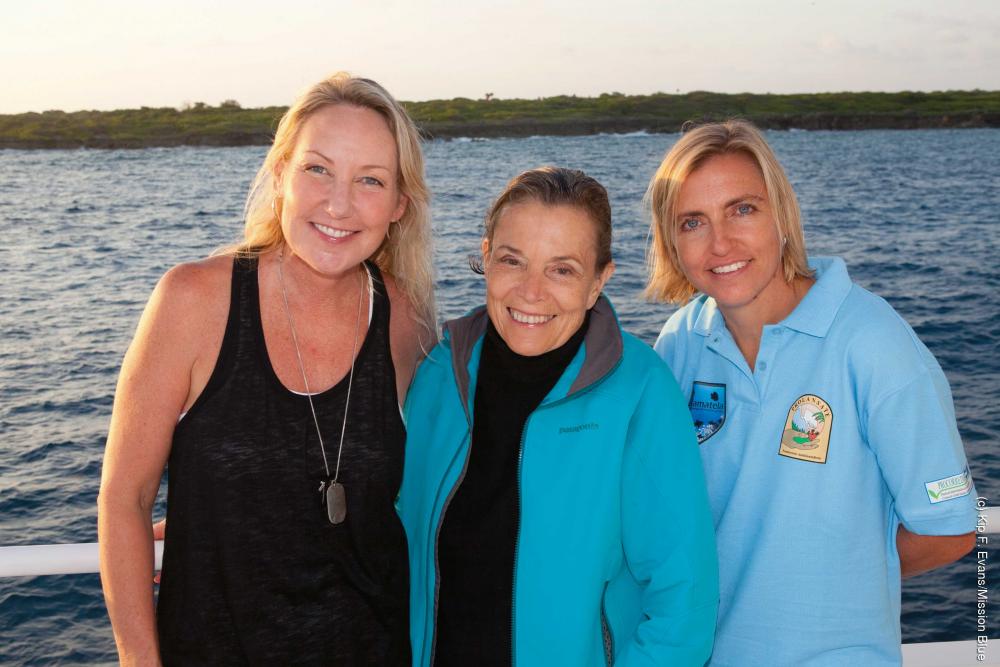 Partnering with Smithsonian and large conservation organizations like the Nature Conservancy and the World Wildlife Fund, HR4HP was able to unite conservation leaders in the region to protect the MAR. One of the products of this partnership has been the creation of a biennial report card measuring MAR health through a 5-point ranking system. This report card creates a consistent way of measuring reef health over time. The report card measures reef health based on 4 factors:

The higher the numbers of coral cover, herbivorous fish, and commercial fish there are in the reef, the healthier it is; the more that it’s covered by fleshy macroalgae (seaweed that competes with coral for space), the less healthy the reef. Based on that year’s scores, the reef receives a final grade and recommendations for improvement. One example of a HRI recommendation is increasing the amount of marine protected areas (areas where fishing is prohibited) to eventually 20% of territorial seas in each MAR country. The confidence in the robust science of the Smithsonian helped build trust and agreement for the use of these indicators and simplified assessments of reef health. 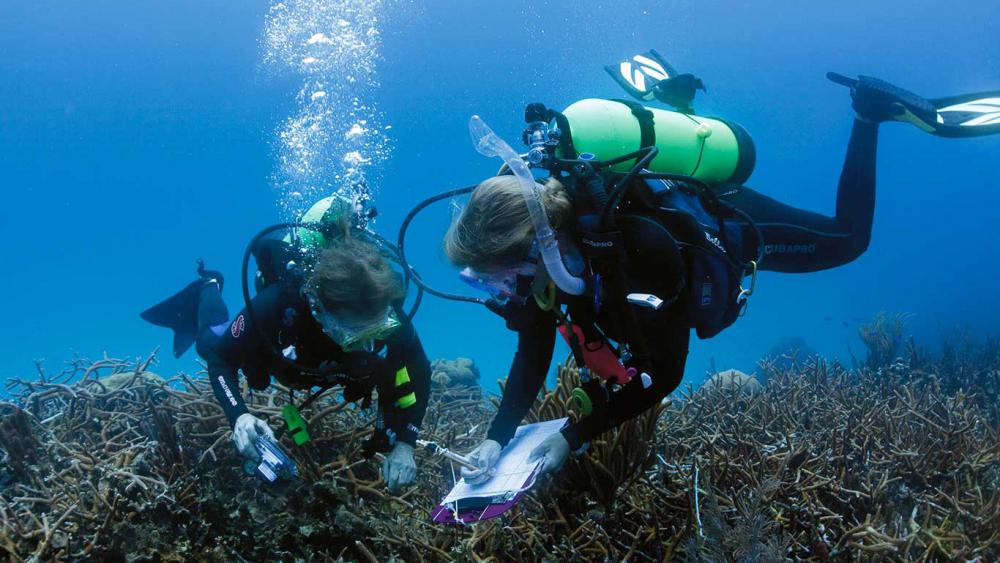 To create the report card, scientists conduct field surveys and species identifications at more than 200 coral reef sites in the MAR. Teams have ‘fish surveyors’ who count and estimate the size of different fish species. The ‘coral surveyors’ determine the percentage of coral cover, size the corals, and assess their condition. They also count quantities of sea urchin, lobster, and conch. HR4HP makes this data accessible to others on an online database. This data is then analyzed and used to create the report card. The program also organizes trainings with local partners to prepare NGOs and biologists to collect this data. Smithsonian researchers keep the teams abreast of the latest ecological theories, scientific tools, and technologies.

After making recommendations based on these findings, HR4HP created an eco-audit to track how international policymakers were using the report card to make policy decisions. Putting pressure on countries through friendly competition over how they are graded in the eco-audit is a way to ensure that the management recommendations are adopted and the report cards lead to quantifiable improvements in ecosystem health. 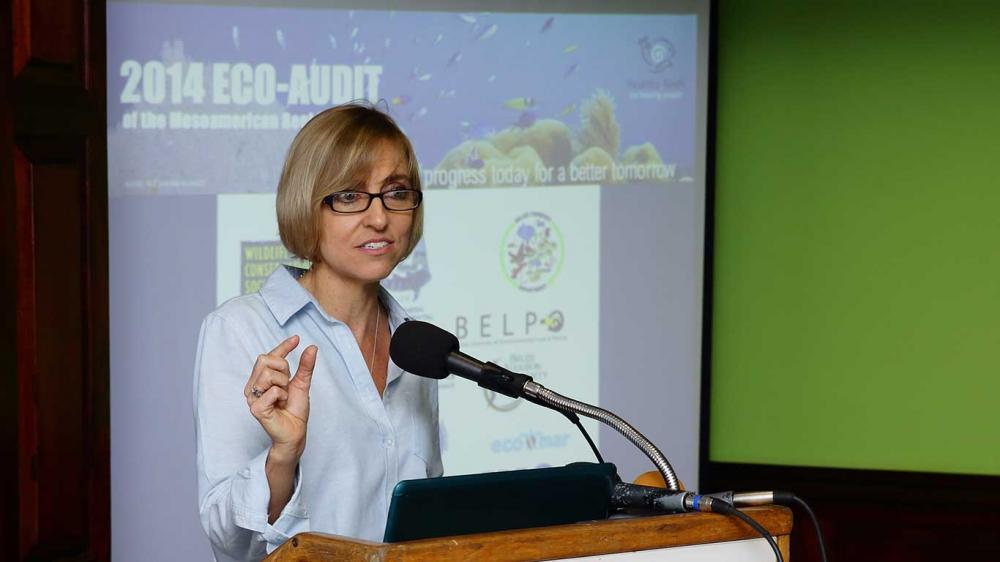 During the launch of the 2014 Eco-Audit in Belize City, Melanie indicates the small amount of progress measured in that evaluation. Credit: Alexander Ellis / Oceana.

The HR4HP report card is the first comprehensive and quantitative framework for evaluating and improving reef health in the world. Since 2004, the program has built an impressive partnership that has grown from 4 international conservation organizations to 65. In response to the report cards and eco-audits, all four MAR countries—Belize, Honduras, Guatemala, and Mexico—have made positive and meaningful changes to their reef policies.

Things are looking up for the MAR. In 2015, the Report Card showed that the overall health of the Mesoamerican Reef has improved—from a 2006 rating of “poor” to its current rating of “fair”. Quantities of coral cover and key herbivorous and commercial fish have risen. The report card also found that “no-take zones,” or marine protected areas where no fishing is allowed, are areas where these key fish species flourish, with ten times more snappers and groupers in these zones. 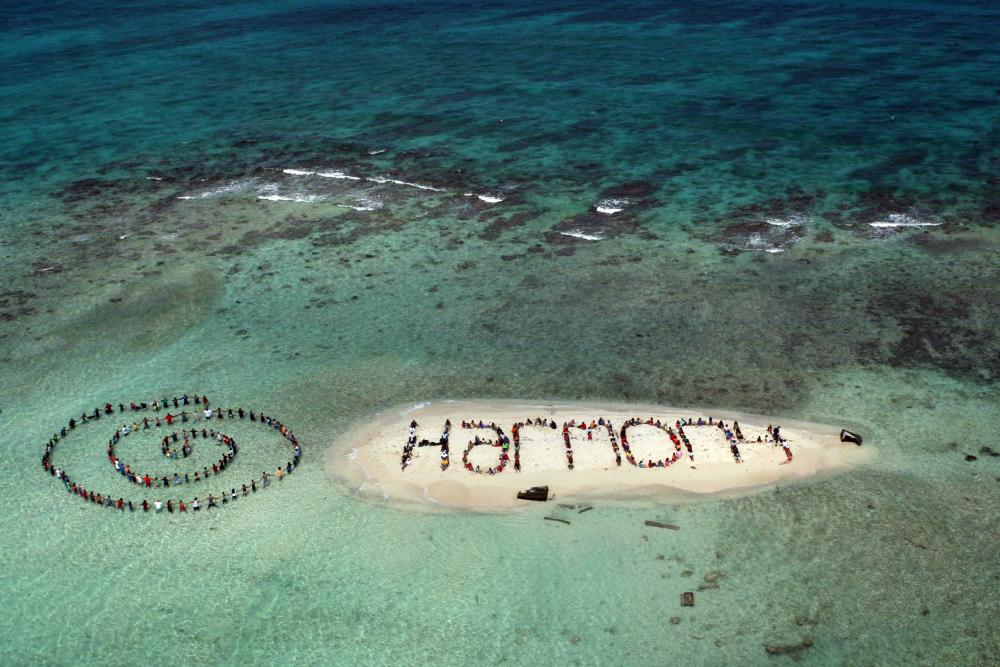 One key indicator of the MAR health improving is the growing numbers of parrotfish across the region. Parrotfish, one of the key herbivorous fish species that the report card measures, are necessary for reef health because they consume algae that can grow out of control and smother coral. Guatemala, Belize, and some of Honduras have outlawed all fishing of parrotfish, while Mexico has started a study and an awareness campaign about the value of parrotfish.  HRI is hopeful that the MAR will soon become the first international reef ecoregion to have fully protected all of its parrotfish.

However, HR4HP has much work left to do. Although certain aspects of the MAR’s health are improving, the overall health of the reef is still at risk. To meet the growing need for more information on the MAR, HRI needs to extend the range and size of their surveys. As Melanie describes, “It’s been 10 years since the first big survey, we need to get back to those 326 original sites,” and get more data. Melanie plans to eventually take the tools the program has been developing over the past decade and use them on a global scale— to spread “this process, this idea of collaboration and pushing science into the field of ecosystem management, in ways that can be understood and applied,” so policymakers and communities around the world can work together to improve the health of reefs and support the people who depend on them.

Smithsonian scientist Melanie McField is the Founder and Director of the Healthy Reefs for Healthy People program at the Smithsonian's National Museum of Natural History.

Smithsonian scientist Melanie McField leads Healthy Reefs for Healthy People, a multi-institutional effort to support conservation of the Mesoamerican Reef by tracking its health and making recommendations to policymakers in order to effect real, positive change for the health of the reef.