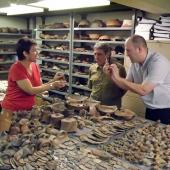 Ranald Woodaman is the Smithsonian Latino Center’s Exhibitions and Public Programs Director. His work at the Smithsonian includes the exhibitions ¡Azúcar! The Life and Music of Celia Cruz (2005); Mexican Treasures (2007); Posters from the Division of Community Education (DIVEDCO) of Puerto Rico, 1949-1989 (2008); Panamanian Passages (2009); Southern Identity: Contemporary Argentine Art (2010), and Cerámica de los Ancestros: Central America’s Past Revealed (2013); and the online exhibitions A Vision of Puerto Rico: The Teodoro Vidal Collection (2006) and Mexican America (2006).

Currently, Ranald is managing several Smithsonian initiatives including the Latino DC History Project and the Caribbean Indigenous Legacies Project. Outside of the Smithsonian, he led the community-curation and design of exhibitions documenting the history of LGBTQ Latinos in D.C. at the Historical Society of Washington, D.C. in 2008 and 2009. Ranald is also the former Vice-Chair of the Latino Network of the American Alliance of Museums (AAM), and is a member of the AAM’s National Program Committee.

Ranald works with the material culture and intangible heritage of the Caribbean, and has a strong interest in constructions of ancestral heritage and making meaning around history in Latino communities.

Learn more about how the Caribbean Indigenous Legacies Project celebrates the survival and vibrancy of Native Taíno culture and people today.

The Caribbean Indigenous Legacies Project retells the story of the Columbus encounter and celebrates the survival and vibrancy of Native Taíno culture and people today.